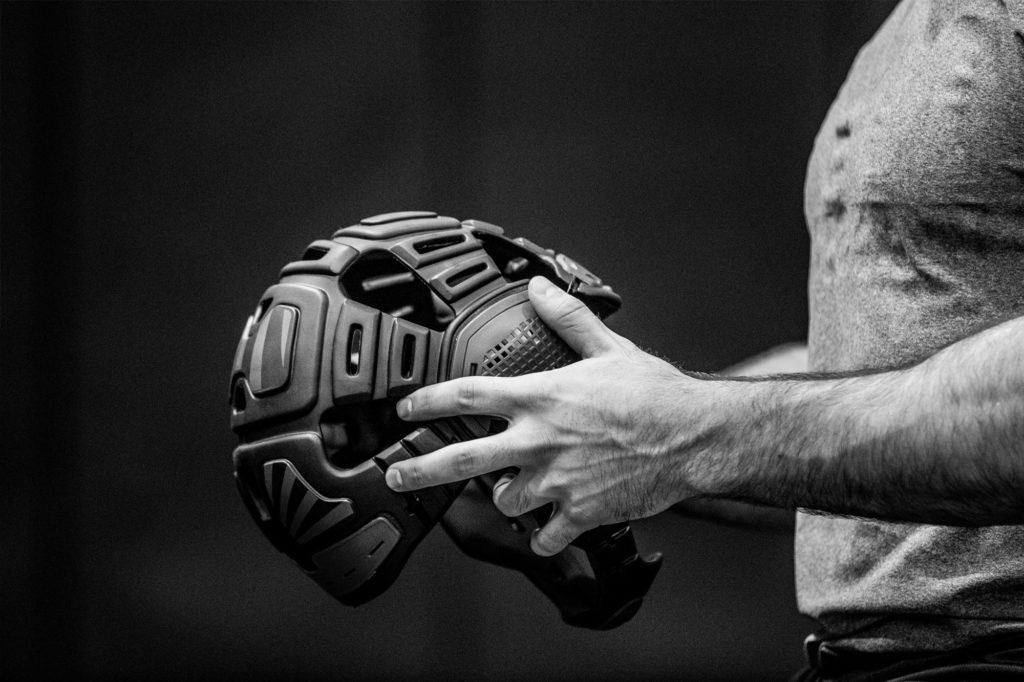 Sports historians have pointed out that wrestling is one of mankind’s oldest forms of organized recreation: some 5,000 years ago Sumerian artisans crafted relief sculptures of wrestlers on stone slabs, and wrestling was among the most popular events in the ancient Greek Olympics. (The philosopher Plato was even said to have been a talented wrestler as a young man.)

The specter of injury has always been an inherent part of the sport, and conventional wrestling headgear, which covers only the ears, provides little protection.

In 2012 Mario R. Mercado, Jr., a former NCAA Division I wrestler then a graduate student studying sports management at NYU, decided to tackle the issue. He approached Tandon School of Engineering professor Nikhil Gupta, well-known for his work with strong, lightweight syntactic foams, and together they assembled a team of mechanical engineering students to improve wrestling helmets.

Called the Mercado® after its inventor, the helmet, which was unveiled at the 2016 Division 1 Wrestling Championships in New York City in late March, represents the first significant change to wrestling headgear in decades. Rather than being secured by a flimsy head strap (easily seized by an opponent), The Mercado® features a two-tier cable strapping system that provides a seemingly custom fit, and while it does have built-in ear guards, it protects the wearer’s entire head — a game-changing innovation considering the high risk of head injury the sport poses. (Mercado, whom Governor Andrew Cuomo recently appointed as New York State Athletic Commission Regulator for boxing and Mixed Martial Arts, has estimated that there are more than 100 million people worldwide practicing wrestling in some form, and some 2 million suffer from concussions each year.)

Gupta, who serves as Chief Technology Officer for BATS-TOI®, constructed the helmet with a patent-pending blend of elastomeric polymer and viscoelastic foam materials – also known as memory foam – which provides both comfort and stability. “I was very pleased to be involved in the development of the product,” he says. “This is a perfect example of how academic research can be used to develop products relevant to real-world problems and put technology in service to society, always a focus at Tandon.”

Mercado also recruited expert neurologists and biomedical engineers in the area of head injury and Chronic Traumatic Encephalopathy (a progressive degenerative disease found in athletes and others with a history of repetitive brain trauma) to help develop his namesake product. He points out that while no one piece of equipment can totally prevent head or neck injuries, the innovative headgear could make wrestling safer for generations to come. He envisions eventually expanding his line to include protective gear for other sports. “BATS-TOI® is determined to improve safety standards in competitive sports and the overall quality of life of athletes who perform at all levels, from amateur to world-class, to professional,” he said.

Mercado hopes that the headgear, with its sleek, futuristic look, might attract more young people to the sport, which has long been an iconic part of the modern Summer Olympics. (It was briefly removed from the roster after the 2012 Games, when the Olympic Committee questioned its marketability and spectator-friendliness.) “Football equipment has always looked cool, and some kids are attracted to it because of that,” he says. “Now they can have a wrestling helmet that’s just as cool if not even cooler. Wrestling is truly dynamic and thrilling to watch, and it requires a lot of finesse and knowledge of technique. Our equipment should complement that.”

Professor Gupta has a history of providing expertise on helmet safety. Watch him on NBC’s “Science of the 2012 Summer Olympics: Engineering in Sports” video.

share the article:
"NYU recognizes The Mercado®"
with other athletes!